Fly spray has a few different options for how they work. The “traditional” fly sprays as I call them can be either oil based or water based. Then there is a growing segment of natural fly sprays, which almost always are oil based. Instead of petroleum-derived oils though, they are botanical oils. The numerous sprays available between the traditional and natural categories contain ingredients like pyrethrins, permethrins, piperonyl butoxide, butoxypolypropylene glycol, neem oil, citronella and many more. But which type of fly spray is best? And what do all those ingredients do?

The answer to the first question is, it depends. There are of course pros and cons to both traditional and natural sprays, and water-based or oil-based.

Oil based tend to stick to the horse better and last longer, but the oil attracts dirt and dust and can irritate the skin of the horse with heavy or constant application.

Water based can be a bit shorter-lived in effectiveness. For a horse with sensitive skin they tend to be less likely to cause reactions though, and they won’t attract dirt and dust like an oil based will.

Natural fly sprays eliminate the harsh chemicals of traditional fly sprays, but they tend to use botanical oils instead of the petroleum-derived oil in the traditional choices. So there is still a chance they can irritate the horse’s skin, and again are more likely to attract dirt and dust. Many of them do not actually kill the flies either, and instead work more by just repelling them from landing on the horse. But, being derived from natural botanicals, they are far less toxic to the overall environment, including our friends the honeybees.

Moving on to the ingredient lists, there are a lot of different options and additives in the various sprays and the list would get too long to include all of them here, so we’ll just focus on the most popular ingredients.

Pyrethrins: These are a class of organic compounds normally derived from a specific variety of the chrysanthemum flower, though all chrysanthemums contain them. They have potent insecticidal activity by targeting the nervous systems of insects. Pyrethrins can be considered an organic insecticide when not combined with a synthetic adjuvant such as piperonyl butoxide. Toxicity in horses, people and other mammals is possible, though rare due to the easy metabolism of the compound in mammals. It is, however, most easily accumulated in toxic levels through respiration into the lungs. Pyrethrins are also highly fatal to honeybees and fish, so care should be taken in application and disposal to prevent contamination of areas where these species may be. Due to their organic nature, pyrethrins also tend to degrade rather quickly in the environment with UV exposure, which is why they are frequently combined with other active ingredients to extend protection.

Permethrins: A chemical classified in the pyrethroid insecticide group. The chemicals in the pyrethroid group are created to emulate the chemicals found in the chrysanthemum flower, pyrethrins. They are generally much longer-lived in the environment under UV exposure than pyrethrins, which is why they are often combined with them in many fly sprays. It is also highly effective against fleas, ticks, and mosquitoes. Due to its more persistent nature than pyrethrin though, that means permethrin can also can create a toxic environment for beneficial insects such as honeybees and dragonflies, as well as in aquatic environments for fish and other marine animals for much longer, so care should be taken in it’s application. It is also highly toxic and even fatal to cats, which is why many anti-flea medications intended for dogs can not be used on cats. As such, care must also be taken not to expose any barn cats to excessive amounts of fly spray containing permethrin.

Butoxypolypropylene glycol: This is the most often used repellent ingredient in traditional fly sprays. While pyrethrins and permethrins kill insects, they don’t have any repellent action. For added protection from those nasty little buzzers, some sprays include this as well to prevent flies and other pests from landing on your horse in the first place.

Piperonyl Butoxide: Despite having no insecticidal effect of it’s own, piperonyl butoxide is used as a synergist of both pyrethrin and permethrin. This means it enhances the potency of both of these compounds. It works by preventing the oxidative breakdown of the pyrethrins and permethrins in the insects (yes, they can survive those, even if they appear dead at first!) By significantly increasing the effectiveness of the pyrethrins and permethrins, a smaller dose is necessary to achieve results. So you may see lower amounts of those compounds on the label compared to other fly sprays as a result if piperonyl butoxide is added. 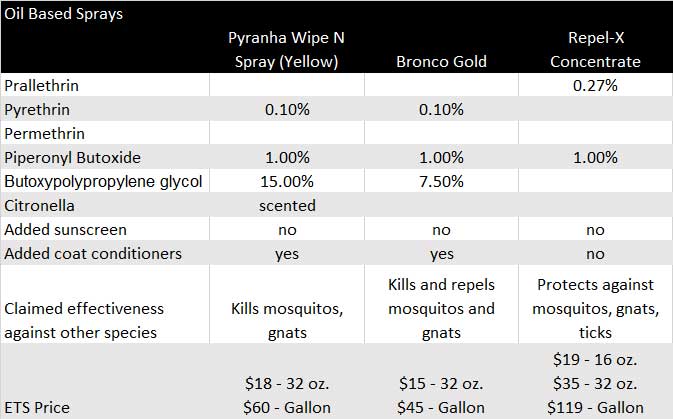 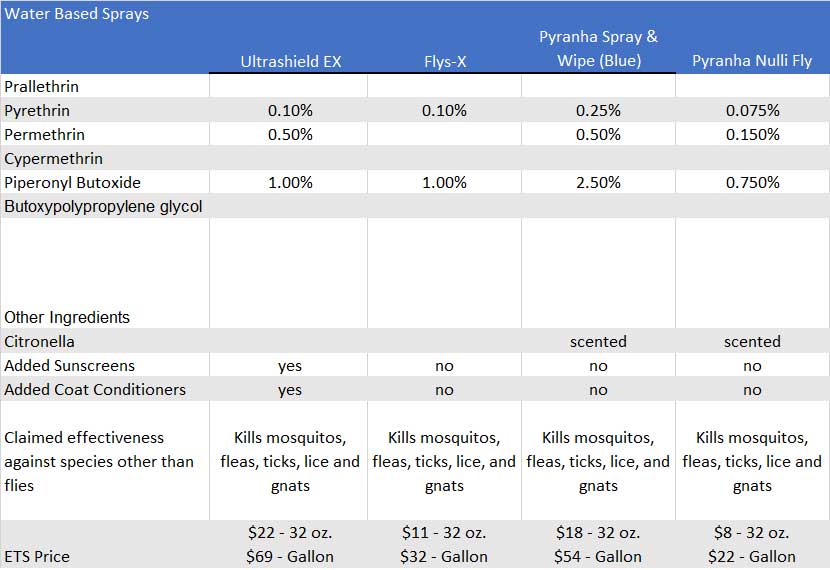 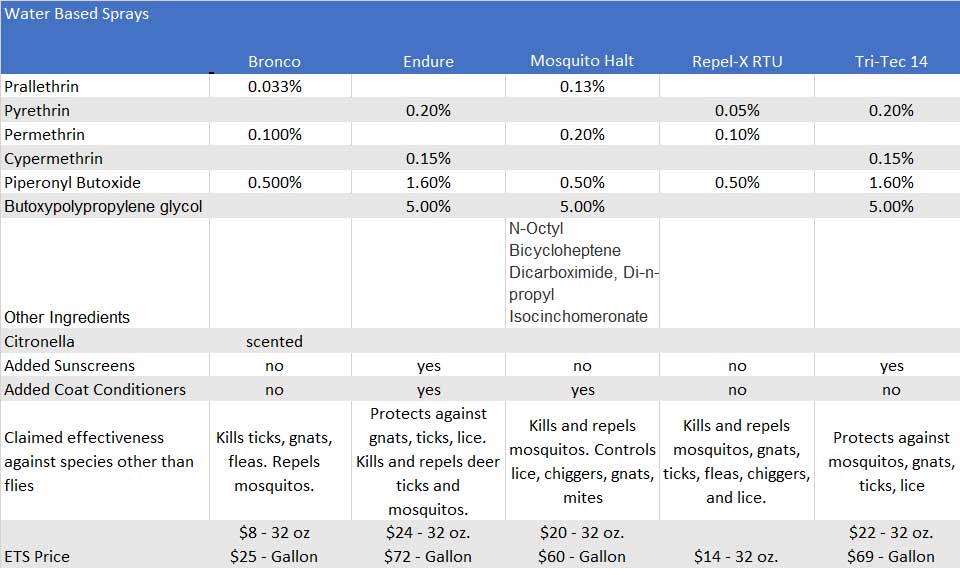 Neem Oil: This oil comes from the seed of the Neem Tree, native to India. It is a highly effective insect repellent and in some cases also an insecticide. It often does not work by killing insects outright, but by disrupting their growth, feeding, molting, and reproductive habits. So the effects may take a bit longer to notice, but can arguably be just as effective at controlling pest populations over the long run, without the toxic side effects. The jury seems to still be out on whether it will harm honeybees, but it would appear that unless the honeybees are sprayed directly there will be little effect to them. This is due to the fact that the primary route of effectiveness for neem extracts is through ingestion, and honeybees simply don’t feed on the things that you’re likely to be spraying.

Citronella Oil: This is probably the most well known and widely used of all the natural oils available. Many “traditional” fly sprays have added citronella as well. It is a powerful repellent of most species of flies, as well as mosquitoes. However, for effectiveness at repelling mosquitoes it has been shown that it must be re-applied every 30-60 minutes. Citronella is extracted primarily from lemongrass, so you may see that listed on the label as well.

Geraniol is a major component of citronella oil, though it can also be extracted from other plants and is sometimes listed separately on labels. As an interesting side note, geraniol is produced by the scent glands of honeybees to mark both nectar-bearing flowers and the entrance to their hives. So it is possible that while your geraniol-containing fly spray may deter flies, it may actually be attracting bees.

Other ingredients can include lavender, cedar, peppermint, eucalyptus, and many more.  Each have their own properties, and have repellent effects on many flying insects. 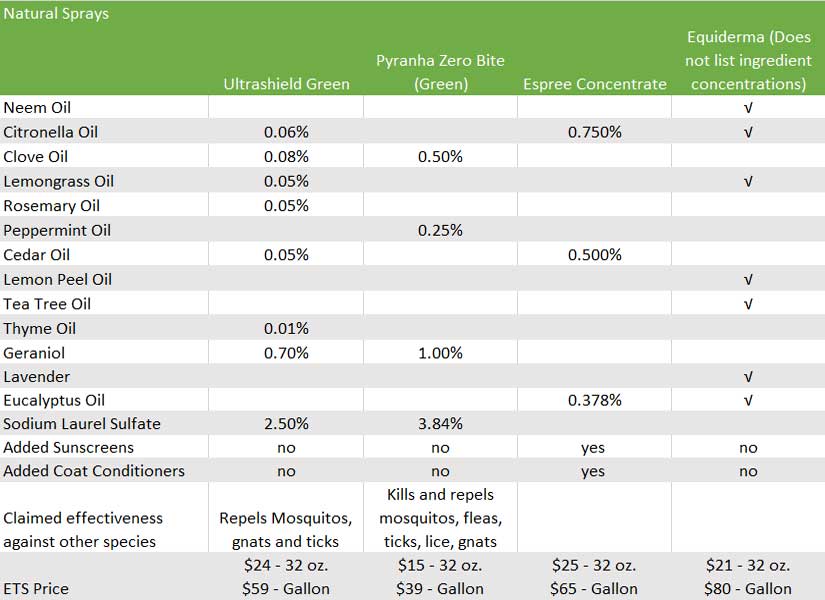 As you can see, there are a lot of choices and truthfully, the best answer can vary. It will depend largely on the area of the country you are in, the weather, the specific type of pest you are trying to control, and your willingness to risk the various environmental concerns like accidental exposure to honeybees and aquatic life. But hopefully this will at least guide you to making a more informed choice. Below is our handy fly spray chart! It has all the most popular fly sprays on the market so you can quickly compare active ingredients, extra ingredients like sunscreens and coat conditioners, and also the ETS prices for each!

*Prices effective 9-3-2020. Subject to change at any time without notice.  Don't see your favorite spray listed here?  Email us at info@equinetherapeuticsupply.com to have it added!*